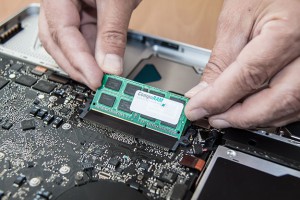 Today, we undertook a short but ambitious series of tests to find out how our graphic designer’s ageing and well-worn „late 2008“ MacBook Pro (15-inch, 2,4GHz Intel Core 2 Duo) might best be prepared for a demanding task: Expand RAM? Convert to SSD? Both? Or is there really no way around investing in a new device? Check back soon for the results!

Who dares, wins, we thought. And so we went ahead and upgraded the system to 8 GB RAM. While Apple specifies a maximum of 4 GB RAM for this system, we have offered a compatible upgrade to no more than 6 GB to date based on the official information available to us on the updated firmware. The end result of the memory upgrade was a fast and completely stable MacBook.

How could that be? Some quick research led us to the answer: In late 2009, Apple issued a changed EFI firmware update for ‘late 2008’ MacBook and MacBook Pro models but did not document the impact of this update on the maximum addressable RAM (potential of 8 GB as opposed to 6 GB).

The situation is complicated by the fact that the (identical) version number makes it impossible for users to tell whether they already have the updated firmware version installed on their MacBook, or whether they are still running the earlier one, which can only address 6 GB RAM.

So, should you encounter problems running 8 GB RAM on your ‘late 2008’ MacBook/MacBook Pro, you can assume that the problem is the firmware; a quick update should fix it.

The following firmware updates should be installed on your device as a minimum to ensure that your MacBook(MacBook5,1 Series) oder MacBook Pro(MacBookPro5,1 Series) is able to fully address 8 GB RAM:

In addition, the operating system should be updated to at least OSX 10.6.6. 8 GB RAM can be used to full effect from ‘Snow Leopard’ onwards.

By the way, if you have installed the latest EFI Firmware Update 2.8 (of 28 February 2012) on your system, you can upgrade your MacBook Pro to 8 GB RAM straight away with no further issues.

In our photo tutorial, you will learn how to upgrade your MacBook to 8GB, step by step.

How much RAM slots does my system have?