Often, you don’t need a lot to rev an aged computer. But what are the signs that not enough working storage is the reason why the system is working slowly? We explain to you, how the operating system and the main memory work together and offer you some clues, how to determine for sure if a RAM upgrade is speeding up the working pace of your computer.

Interaction of physical and virtual memory

The overall RAM, which the operating system as well as the applications of a computer can use, is composed of two memory types: The so-called physical memory is located on the memory chips of the system installed Random Access Memory (RAM) modules.

Shortage in the physical memory – symptoms

The outsourcing storage is distinctly working slower than the physical memory – no wonder because RAM modules are ten times faster than modern SSDs, which on their part excel the speed of conventional hard disks by far. That’s the reason why operational systems try to keep frequently used data in the physical memory.

With older computers, equipped with relatively little RAM, the physical memory is soon limited – especially when more applications are opened at the same time, for example the browser with some tabs, an image editing software, a mail client, the spreadsheet … in such cases, frequently used data is outsourced into the virtual memory, which slows down work performance. Moreover, the chattering of the hard disk is accompanying every swap between the several opened applications. That’s most likely a signal that an upgrade of the physical memory would effectively lead to a better performance.

To confirm this diagnosis, it’s useful to check the memory information module, which, among other things, shows the workload of the RAM – in Windows it’s called the “Task Manager”.

Select the Task Manager by clicking on the taskbar in the lower screen edge with the right mouse key. Alternatively, you can use the shortcut CTRL+SHIFT+ESC to get to the Task Manager – independent of the Windows version. 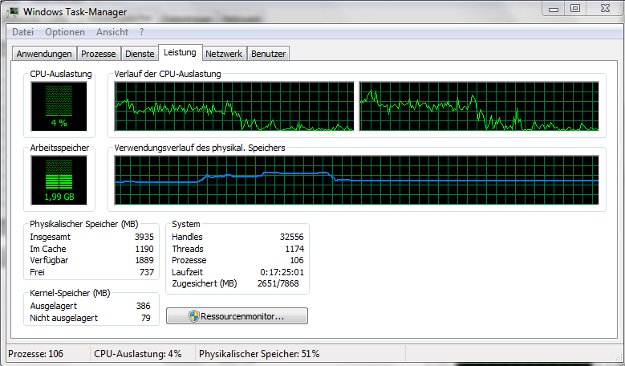 In the tab “Performance”, you will get an overview of the workload on your system in realtime. Is the physical memory capacity exhausted, the blue line under “Memory usage history” slips right to the top. The table on the left side gives you information about the installed RAM of your physical memory and its efficiency.

To analyse the performance display in detail and to get an exact value of the “missing” physical memory, extensive measurements and calculations are necessary.
Our recommendation: If under “Free” only some megabytes are specified, then a memory upgrade to maximum values is the right and useful choice. That’s how your system will be up to the tasks ahead.

An additional overview of the usage of RAM resources can be retrieved with a mouse click and – depending on the Windows version – input of the administrator account on the button “resource monitor” (alternatively, go to the resource monitor by clicking on “Start” and typing “resmon.exe” into the search field). 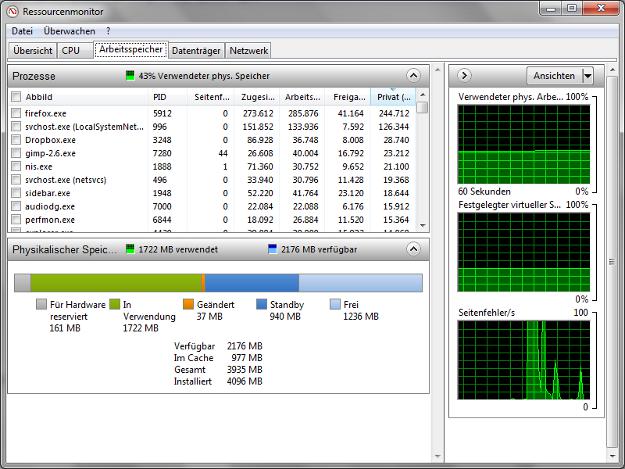 Don’t let yourself be misled by the display of “page faults” because they are no sign for a functional error of the RAM.

A page error appears when for example an application is trying to access an area of the working memory, which at the moment isn’t located on the RAM, but in the virtual memory of the hard disk. The operating system initialises the corresponding storage area to load back into the physical memory, so that the application can access it. If there are some page faults appearing regularly, then this could be a sign of a shortage in the physical memory. In this case, the installation of additional RAM would speed up the performance.

How to supply your system quickly and safe with more RAM, you will find out in our blog entry “Checklist: Four steps to an effective RAM upgrade”.

One thought on “Not enough RAM? A quick test with Windows board mediums”